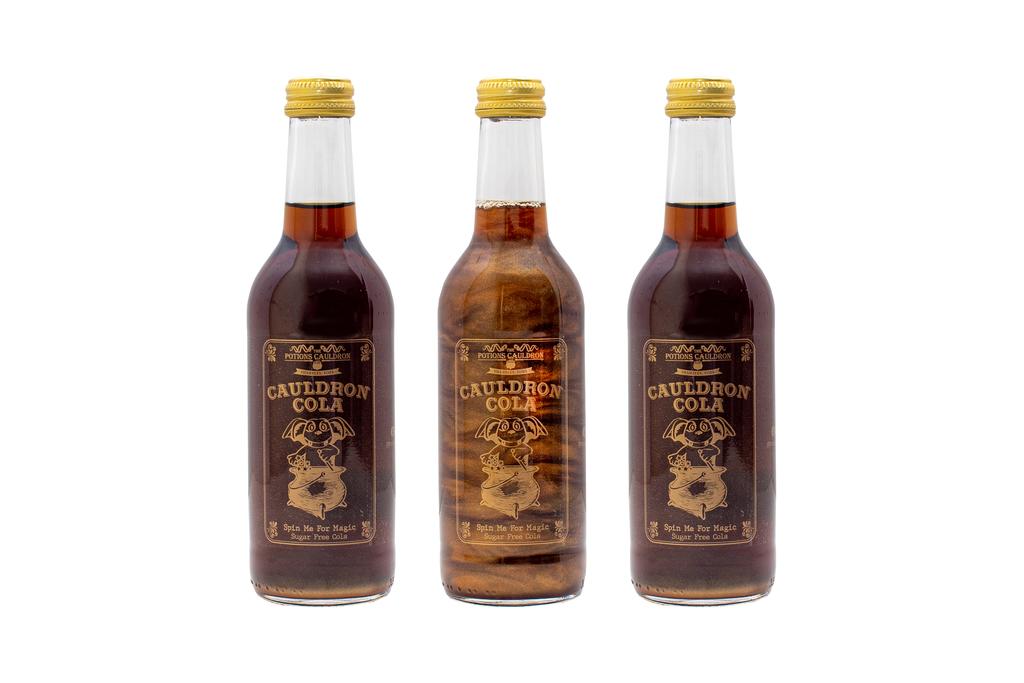 This week sees the launch of a brand new magically infused beverage from the wizards at York Potions Cauldron, a sugar-free cola drink that is set to sparkle against the competition.

With cola maintaining its decades-long dominance of the £5 billion soft drinks market, making up 50% it is no wonder that the magicians behind the popular Potions Cauldron on York’s Shambles have worked with their apothecaries to create their very own sugar free cola to go up against the big players with a magical twist.

This latest brew, titled Cauldron Cola, has been developed with the official Gargoyle of the Potions Cauldron, Grobblenook, as inspiration. Using his essence to reveal something magical when drinkers turn the bottle upside down three times.

“We’ve always wanted to a brew a charmed cola, something infused with the cheeky charm of our resident gargoyle that trainee witches and wizards can enjoy guilt-free and enjoy a magical treat at the same time. We spent a long time perfecting the potion, balancing all the ingredients to ensure that Cauldron Cola stands up against the giants of the category – but we’re not worried, when you have a great tasting, sugar-free drink, infused with magic?!”

With the launch of Cauldron Cola, the wizards are keen to share the magic as much as possible by undertaking an enchanted taste test. Taking to the streets of York this week they will invite the public to taste the very first Gargoyle inspired and fronted sugar-free cola and enjoy the magical qualities over their more traditional rivals.

This launch comes after a charmed start to 2022, with the potion-making business opening a new outlet at York Station, The Potions’ Express, as well as being shortlisted for two accolades in the Federation of Small Business’ Food and Drink Heroes Awards.

“From the start, we’ve always wanted our business to be experiential – immersing our customers in the magical world of the Potions Cauldron, and this launch is no different. The fantastical elements are on display, and it will sit well alongside our other potions. We’re excited to see how this new drink, in a competitive category, performs and long may the magic continue!”

Cauldron Cola is now available in the Potions Cauldron, Shambles, Potions Express at York Station and the Hole In Wand, Coppergate as well as online at www.thepotionscauldron.com.